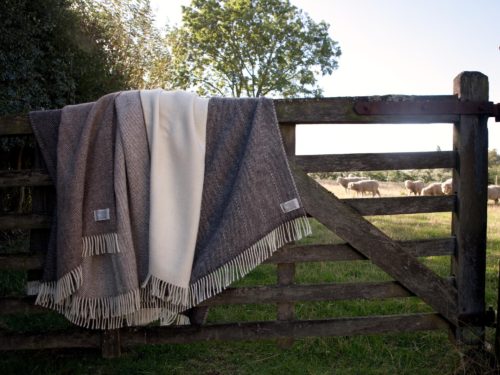 Established in 2018, Romney Marsh Wools is owned and run by Kristina & Paul Boulden and based on the family farm on the Romney Marsh, Kent, with Romney sheep having been in the family for at least 6 generations. Current numbers are around 1,200 Romney ewes in the flock along with 150 Merino ewes.

Romney Marsh Wools was born through a firm belief in raising the awareness of all the benefits wool can bring and a wide range of products are produced using their own Romney wool. Each of the products are made by the very best British makers, all of whom are experts in their field and many who still use traditional techniques. The range includes homewares such as throws, blankets & cushions as well as clothing, from flat caps and baker style caps to scarves, ponchos and moccasins, to name just a few. Lanolin is a naturally occurring fat in wool and this is used to produce a range of toiletries including shower gel, shampoo, soap and moisturiser.

The most recent addition to the farm is Romney Marsh Shepherds Huts, two luxurious huts which sit in the heart of the farm, with stunning views over the Romney Marsh and a chance to unwind and get close to nature, with vast open skies and beautiful, peaceful surroundings.

This website uses cookies to improve your experience while you navigate through the website. Out of these cookies, the cookies that are categorized as necessary are stored on your browser as they are essential for the working of basic functionalities of the website. We also use third-party cookies that help us analyze and understand how you use this website. These cookies will be stored in your browser only with your consent. You also have the option to opt-out of these cookies. But opting out of some of these cookies may have an effect on your browsing experience.
Necessary Always Enabled
Necessary cookies are absolutely essential for the website to function properly. This category only includes cookies that ensures basic functionalities and security features of the website. These cookies do not store any personal information.
Non-necessary
Any cookies that may not be particularly necessary for the website to function and is used specifically to collect user personal data via analytics, ads, other embedded contents are termed as non-necessary cookies. It is mandatory to procure user consent prior to running these cookies on your website.
SAVE & ACCEPT